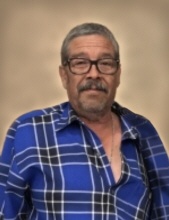 Funeral services for Michael Ray Covarrubias will be held at 2:00 pm Tuesday, August 13, 2019, at the Sacred Heart Catholic Church in Plains with Father Eduardo Teo officiating. Burial will follow in the Plains Cemetery under the direction of Brownfield Funeral Home.

There will be a rosary held starting at 7:00 pm Monday, August 12, 2019, at the Sacred Heart Catholic Church in Plains.

Michael passed away on August 9, 2019, in Lubbock. He was born September 12, 1961, in Lubbock to Abel Pedro Covarrubias Jr. and Dora Rae Duran Covarrubias. He graduated from Lubbock High School. Michael worked as a Heavy Equipment operator. He married Gloria on December 10, 1979, in Plains. He was a kind-hearted and loving father, husband, grandfather, and brother. He always put his family first. He is preceded in death by his mother, Dora.