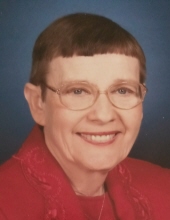 An Earth Angel was born, Mildred Elizabeth Cole, to Dewey and Mary Elizabeth (Vogel) Cole in Phillips, Texas, on July 10, 1941. She earned her Heavenly Wings on January 2, 2021.

Mildred attended all twelve years in Phillips Schools and graduated from Phillips High School in 1959. She met the love of her life, Don McWhorter. After graduation, Mildred attended Draughn’s Business College and married Don on October 12, 1959, and became a Soldier's Wife and moved to Fort Ord, California. When Don went to Korea, she came back to Texas and worked for Phillips Petroleum Company.

They moved to Fort Benning, Georgia, where she had her two children, Donna in 1962 and Michael in 1964. She was active in Asbury Methodist Church. She sang in the Choir and taught Bible School.

The family moved back to Brownfield and built their home. Millie worked at Brownfield Schools as a Paraprofessional Library Aide for 18 years at Intermediate School and then at High School for 4 years before retiring in 1997.

After retirement, she and Don traveled in their motorhome for 20 years and visited all 48 states, Mexico and Canada. They saw all the places she read about in Weekly Reader as a child.

She was active in Brownfield First United Methodist Church where she taught Sunday School for 15 years and sang in the Choir and served many different positions on the church board. She helped found and served on the board of the Interfaith Center Thrift Store. She was active in many community activities throughout the years.

A Virtual Memorial Service will be held at 2 pm on Thursday, January 14, 2021, with Pastor Cameron Kirkland officiating. The service may be viewed on either the Brownfield United Methodist Facebook page (https://m.facebook.com/brownfieldunited/) or the West Texas United YouTube page (https://www.youtube.com/channel/UCUPmZY7VsZzxlojHg2Efb4Q). In lieu of flowers, the family suggests memorials to FUMC Brownfield.