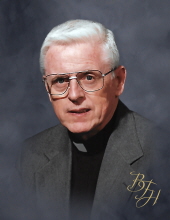 Monsignor Gerald Leatham passed away peacefully in Brownfield, TX on January 12, 2022 after a brief illness at the age of 81. He was born on October 25, 1940 in Dublin, Ireland to Joseph and Brigid Leatham. He left Ireland at the age of 13 to attend Highcliffe Castle Claretian Seminary in Dorsett, England from 1953-1965. He was ordained a Catholic priest in 1965. In England, he worked as a priest near London for 3 years. From 1968-1990 he served in Entre Rios and Livingston, Guatemala during the time of the Guatemalan Civil War. He then arrived in the Diocese of Lubbock in 1990, serving in Spur, Snyder, and Brownfield, TX until 2015.

Monsignor Gerry was passionate about his family, friends, and his ministry. He has impacted many lives in many countries. His life was fueled by his love and devotion to his many parishioners and fellow clergy. His sense of humor, genuine love of others, and generous spirit has been an inspiration for all who have known him. Gerry uniquely brought light and love to those suffering war, poverty, sickness, and loss.

Father Gerry loved soccer and American football, especially Manchester United and the Dallas Cowboys. He enjoyed sharing his love of music and British television. One of his favorite experiences was officially becoming a US citizen in 2003.

He is preceded in death by his loving sister Angela Ryan (Ireland), his loving brothers Brian Leatham (South Africa), John Leatham (Ireland) his brother-in-law Martin Ryan, sister-in-law Anna Leatham, his niece Jackie Leatham Corbett (Ireland). Sadly he is missed by his brothers Brendan and Paddy and his sister Philomena, his brother-in-law, sisters in law, his cousins and his many nieces, nephews, grand nieces and nephews, his extended family, and his many good friends and neighbors in Killala Road, Dublin and across the world.