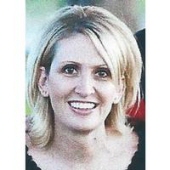 Services for D’Lynn Patton Sires, 49, of Sundown will be held at 2pm Monday, December 21, 2015 at Brownfield First Baptist Church with Randy Winfrey officiating.

Visitation will be held from 4-6pm on Sunday, December 20, 2015 at Brownfield Funeral Home.

D’Lynn was born June 10, 1966 to Arnold and Frances Patton in Lubbock. She graduated from Brownfield High School on May 25, 1984. She continued her education earning an Associates in Arts on May 13, 1988 from South Plains College, a Bachelor of Science in Occupational Education on May 10, 2003 and a Masters of Education on May 14, 2005 from Wayland Baptist University. D’lynn married Martie Sires on April 3, 1997 in Jamaica. She owned Cuttin Loose Hair and a Cruise Agency. She was a 1st grade teacher for Sundown ISD for 10 years and also worked in Special Education. D’Lynn is preceded in death by her paternal grandparents, Audrey and W.E. Patton and maternal grandparents Arnold and Lennis Burnett.

In lieu of flowers, donations can be made to St. Jude, Ronald McDonald House in Lubbock or favorite charity.