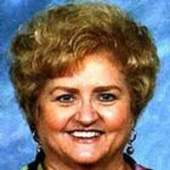 Nancy LaRue (Garner) Dobson of Brownfield, TX was born May 27, 1937 to the late O.R. and Odessa Faye Garner in Seymour, TX and passed away October 23, 2014 in Lubbock, TX. She graduated from Seymour High School in 1955 and married Billy Gene Dobson, also of Seymour, on November 30, 1956. They lived in Hobbs, NM from 1964-1972 before moving to Brownfield. Nancy worked at Brownfield City Hall for 25 years, and was an active member of the First Baptist Church.

A public viewing will be held at Brownfield Funeral Home on Sunday, October 26th from 1 P.M. to 8 P.M., with visitation from 5 P.M. to 7 P.M. A public funeral will be held on Monday, October 27th at the Brownfield First Baptist Church chapel at 10 A.M., followed by graveside services at Riverview Cemetery in Seymour at 4 P.M. In lieu of flowers, donations can be made to the American Breast Cancer Foundation. She was loved and cherished in life, and will be missed by her friends and family.