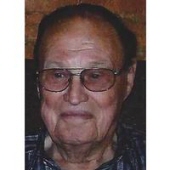 Oail passed away Tuesday, March 1, 2016 in Brownfield. He was born on September 17, 1925 in Williamson County to Emmitt Parmer and Mertal Garrison. Oail served in the United States Army during World War II. He married his wife of 29 years, Nellie Skelton on March 5, 1969 in Brownfield. He worked as a Mechanic for the Coop. He was a member of VFW. Oail had a great passion for dancing. He is preceded in death by his wife, Nellie Parmer, on January 25, 1998. He is also preceded in death by two sisters, Lois Camel and Sue Clayton.