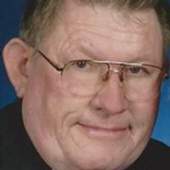 Services for Odis Jackson Boring, Jr. 73, of Brownfield will be held at 11am Tuesday, June 2, 2015, at Calvary Baptist Church with Rev. Steve Carter and Will Baker officiating.

Visitation will be held from 5-7pm Monday, June 1, 2015 at Brownfield Funeral Home.

Odis was born on February 12, 1942 in Haskell, Texas to Odis Jackson, Sr. and Georgia McDaniel Adams Boring. He graduated from Brownfield High School and attended South Plains College. Odis married Beatrice Mounce on December 1, 1977. In his early years Odis owned Sonny's Grocery Store prior to his 32 years of employment at United. He was a member of Calvary Baptist Church, a Minister to senior adults for many years and a Board of Directors member of Jaycee's. Odis is preceded in death by his parents; 3 sisters, Frankie Franklin, Merva Stallings and Rita Degrafenreid and a brother, Olan Boring.