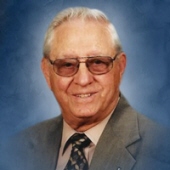 Odus Walser, 95, of Brownfield, Texas passed away March 14, 2019. Odus was born February 20, 1924, in Chillicothe, Texas. He served in the United States Army from February 1943 to June 1945 where he received a Purple Heart in the Battle of the Bulge, December 1944. Upon returning from the war he married Kathyleen Bearden on July 14, 1945, who is still living in Wolfforth, Texas. Odus received his Bachelor's and Master's degrees from West Texas State University in Canyon, Texas. Mr. Walser will be remembered by his loved ones for his love of music and of the Bible. He was a teacher in several towns in the area and made a huge impact on many of his students. He was a member of Masons, Lions Club, and The Gideons International.
Odus is survived by his wife Kathyleen, son Rip Walser, daughter Rene Wisniewski, 3 grandchildren, Chad Wisniewski, Danny Walser, and Shane Walser, 6 great-grandchildren, Anna Walser, Megan Walser, Christine Walser, Cayden Wisniewski, Carter Wisniewski, and Maci Walser.
There will be a viewing from 5 to 7 pm Thursday, March 21, 2019, at Brownfield Funeral Home.
Funeral Service will be held at the First Baptist Church in Plains, Texas, Friday, March 22, 2019, at 2 pm. Following the funeral service, the graveside service will take place at the Terry County Memorial Cemetery in Brownfield, Texas.