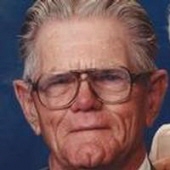 Services for Olen Ervin Little, 90, of Brownfield will be at 2pm, Thursday, February 6, 2014 at the Crossings Church of God with Pastor Mark Prince officiating. Burial will be in the Texas State Veterans Cemetery in Abilene, Texas at 3pm, Friday, February 7, 2014.

Olen went to be with the Lord on Tuesday, February 4, 2014 in Lubbock. He was born on March 11, 1923 in Swink, Okla. to Aaron Franklin Little and Grace Lucille (Davis) Little. He attended school in Swink. He was a WWII Army Veteran. Olen married Laura Mae Davis on July 12, 1946 in Brownfield. He was a self employed builder. He then worked for Goodpasture Grain for 16 years. He was a member of the Crossings Church of God. He was preceded in death by his grandson, Randy Wood; his parents; 9 brothers and 5 sisters.

Olen loved the Lord and he loved his family.