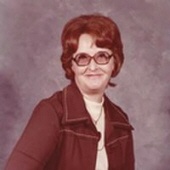 Services for Edna Chisum, 82, of Brownfield, will be held at 10am Monday, January 9, 2017 at Terry County Memorial Cemetery with Johnny Long officiating.

Visitation will be held from 5-7pm Sunday January 8, 2017 at Brownfield Funeral Home.

Edna was born on December 7, 1934 to Newby and Clara Corley in Terry County. She was a very loving person to her family, friends and never met a stranger. Edna married Walter Chisum on October 13, 1951 in Brownfield. She was an awesome cook; no one left hungry and often her husband would bring home strangers he picked up as he worked truck driving. She was a seamstress and sewed for her children, grandchildren and her children’s friends and also for the public for a while. Edna is preceded in death by her parents, Newby and Clara Corley; grandson, Joshua Larson; great granddaughter, Haley Larson and 2 brothers, Carl and Ralph Corley.