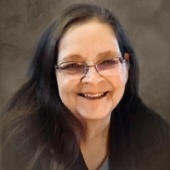 On Monday, May 13, 2019, Paige Hickson of El Paso, Texas, went home to her Heavenly Father after a long battle with breast cancer.
Paige was born on March 14, 1959, in Fort Worth, Texas, but she grew up in Brownfield, Texas. She told many stories about her memories from her teenage life in that small city, including her United States and overseas tour and performances with the Continental Singers. She expressed her love for her city and the community of people that lived in it. After high school Paige continued to be a diligent worker, dedicated to her goals and intelligent in her understanding of life. She was especially proud of the many years she worked for Judge Quay Parker of Anson, Texas. However her greatest accomplishment was raising her three children and being "Mimi" to her many grandchildren.
Paige loved to read and bake. Her Christmas cookies were often the highlight of the season and eagerly waited for by her children and grandchildren. She was an extremely spirited and stubborn person, insisting on working until the last few weeks of her life. We rarely ever saw her complain. She kept her lighthearted sense of humor, even hiding fake cockroaches in her medicine drawer for her granddaughters to find. If you ever wanted to know a weather or traffic report, all you had to do was ask Paige. From her we all learned the value of memories and how important it is to spend time with one another.
Paige is preceded in death by her parents Jerry and Mary Gannaway. She is survived by her son Bret Moon, his wife Kim, her daughter Aimee Conner, her son Justin Hickson, and his wife Tori. She is also survived by her thirteen grandchildren, two great-grandchildren, her brother Craig Gannaway, and his wife Laura as well as many beloved nieces, great nieces and nephews, cousins, and other family members.
Visitation will be held at Brownfield Funeral Home on Friday, May 24, from 5-7 p.m. Funeral service will be held on Saturday, May 25, at 10 a.m., at Brownfield Funeral Home Memorial Chapel.