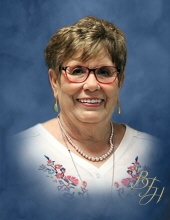 Graveside service for Peggy Jean Howell, 77, of Brownfield will be held at Terry County Memorial Cemetery 11:00 am Saturday, March 5, 2022.

Peggy Jean Howell was born on April 19, 1944, to Adrain Randolph and Alta Laverne Kornegay in Winters. She attended and graduated from Union in 1962. She married Bobby Dale in 1981. Peggy Jean was a homemaker most of her life until she started working as a substitute teacher and at Walmart. She and Bobby Dale toured the country on motorcycles and later in their R.V. She loved attending chili cookoffs and had attended every year for the last 27 years. Peggy Jean was preceded in death by her parents, Adrain Randolph and Alta Laverne Kornegay.