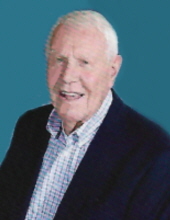 Artie Roland “Pete" Lindsey, Jr. age 85, of Brownfield, Texas entered into eternal rest on Wednesday, September 9, 2020. Pete will be remembered as a godly man, full of laughter and love and light.

Pete was born in Levelland, Texas on June 24, 1935, to Artie Roland and Jessie Mae Lindsey. He attended his school years in Morton, Texas, where he adopted his own surprise vocabulary that will often leave you puzzled and always leave you laughing. After graduating from school in 1953, Pete was drafted into the army where he served for three years including a deployment in Taiwan. After his service, Pete returned to Brownfield, Texas. It’s in Brownfield that Pete met the love of his life, Betty Green. He first admired her in her red 1960 Falcon and never stopped admiring her after almost 60 years of marriage.

Pete worked at Sonny's Feed and Supply with his brother, Winfred Kenneth "Speedy” Lindsey. Pete later bought Sonny’s and added the spraying business with his son Greg. Throughout the years at Sonny’s, Pete met and befriended much of the town. When anyone met Pete, they’d leave with a smile and good mood. You could depend on Pete for his quick wit and contagious laughter. He was always good-natured, with a smile and kind words to say. It fit Pete’s personality that he was a charter member of the Optimist Club. And he relished his time coaching little league and little dribblers for both boys and girls.

One of Pete’s absolute proudest roles was that of an Elder in the Brownfield Church of Christ where he served for many years. Whether he was in his “glad rags” (Sunday clothes) or not, Pete led an excellent example of a godly life. Pete loved God and God’s creations. He treasured his family camping trips to Colorado where he’d hunt, fish, and tell his special brand of hilarious stories.

A graveside service to honor Pete will be held on Saturday, September 12, 2020, at 10:30 AM, at Terry County Memorial Cemetery with Bo Shero officiating, a memorial service will follow at 2 PM at the Brownfield Church of Christ. Friends and family are also welcome to attend a visitation on Friday, September 11, 2020, from 5 PM to 7 PM, in the Brownfield Funeral Home.

In lieu of floral tributes, the family respectfully and gratefully requests donations to Brownfield Church of Christ or your favorite charity. Until we meet again in Heaven, Pete, we say to you: “See ye!”