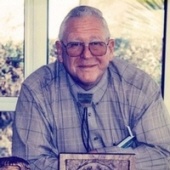 Memorial service for John Phillip Corbett, 82 of Brownfield will be held at 11 am Monday, January 8, 2018, at the Church of the Good Shepherd with the Rt. Rev. Scott Mayer, Bishop of the Episcopal Diocese of Northwest Texas officiating.
Phil passed away Tuesday, January 2, 2018, in Brownfield. He was born March 26, 1935, in Hobbs, NM to Ledyard and Madeline Corbett.
Phil earned a Masters in Education from Eastern New Mexico University. He married Eunice Dickey in Roswell, NM on August 10, 1994. Phil was an ordained Episcopal priest, a member of the New Mexico Teachers Association and a talented wood carver.
He was a loving father and grandfather. Phil is preceded in death by his wife of 37 years, Mildred Corbett, his parents Ledyard and Madeline Corbett, his brother Harry Corbett and his granddaughter Katie Berry.
Phil is survived by his wife Eunice Corbett, his daughter Liz Dom, his son Dan Corbett, his stepson Bill Dickey, his stepdaughter Brenda Dickey, his grandchildren Danielle, Tyler and Dillon Dom; Caitlin, Maddy and Andy Corbett.