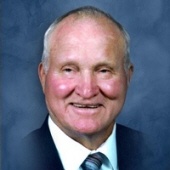 A Memorial Service for R. D. Jones, 95, of Brownfield will be 2:00 pm, Saturday, March 2, 2019 at Brownfield Church of Christ with Bo Shero officiating.
Family visitation will be Friday, March 1, 2019 from 6-8 pm at Brownfield Funeral Home and online condolences may be made at www.brownfieldfuneralhome.com.
R.D. (Riley David) was born on July 8, 1923 to R.D. and Thelma Jones in Brownfield. He was alumnus of Brownfield High School and attended Texas Tech until he enlisted in the United States Navy as a Boatswain's Mate Second Class. He was honorably discharged on January 10. 1946. He married Delma Jean Green on July 4, 1948. After the passing of Delma, R. D. married Elizabeth Snell on October 4, 1984. He farmed for over 55 years and instilled a love for the land in his children from an early age. He served his community in too many ways to mention. He served on the Soil Conservation Committee, Terry County Co-op Gin Board and coached little league baseball. He was honored with Farm Family of the Year and Citizen of the Year in 2012. He loved God, his Family, church and church family. He was a wonderful, loving father, grandfather and great grandfather to his children as well as an amazing Christian example. R. D. had a true servants heart which was evident when he delivered food to a family in need or when he took watermelons to friends all over town. He loved visiting his friends and family in the hospital or nursing home. He will be truly missed by all that knew him and his ability to make you laugh effortlessly. He was preceded in death by his parents, brothers, Jerry and Aubrey, wives, Delma Jones and Elizabeth Jones and son, Jerry Jones.
R.D. is survived by three children, Gary and wife Jackie Jones of Freeport, Jean Ann Banta of Brownfield, Greg and Maria Jones of Ridgway, CO; daughter - in - law, Karen Jones of Brownfield; his sweet dear friend, Fay Smith of Clovis, NM; 8 grandchildren, Brady and Vicki Banta, Dulce and Monnie Soto, Katie and Jason Alford, Craig and Lisa Jones, Lauri and Jarrett Schule, Shane and Jennifer Jones, Chase and Allison Jones, Clay and Addison Jones; 22 great-grandchildren whom affectionately called him "Baw-Baw". He was also expecting a great-great grandchild that is due in September. We want to thank Dr. Paul Chebib and his Staff and the Brownfield Interim Hospice staff, especially Jordan and Bob.