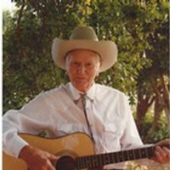 Ray Elbert Hughlett, 100, of Brownfield, died Sunday, April 23, at his home. Funeral services will be at 2 pm Thursday, April 27, 2017 at Calvary Baptist Church, Brownfield, TX. Burial will follow at the old Brownfield Cemetery under the direction of Brownfield Funeral Home.

Ray was raised in the Johnson and Turner communities along the Terry County/ Yoakum County line, west of Brownfield, and was educated at the old Johnson and Turner schools. As a child, Ray built his own toys and musical instruments, combining two interests that would characterize the rest of his life.

In 1936, Ray was married to Opal Lee Upton, of Tokio, and the couple shared 69 years united in marriage.

After early careers as a farmer and a welder and mechanic in Tokio, he went on to a 42-year career as a carpenter. Ray worked on many of Lubbock, New Mexico and West Texas large projects, including Texas Tech facilities, public schools and other commercial buildings. He was also a lifelong musician, playing at country dances around the South Plains during the Great Depression. In later years, he played and sang at many gospel singings throughout the Southwest.

Ray was a member of Calvary Baptist Church in Brownfield.