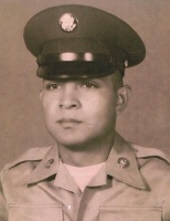 Funeral services for Raymond Sanchez Gonzales will be held at 10 am Tuesday, July 16, 2019, at St. Anthonys Catholic Church with Msgr. Gerald Leatham officiating. Burial will follow in the Brownfield Cemetery under the direction of Brownfield Funeral Home.

Raymond passed away Thursday, July 11, 2019, in Brownfield. He was born in Frankfort, Michigan on August 6, 1947. He was the first child born to Gonzalo and Emma Gonzales. Raymond has five brothers, Gonzalo, Joe, Ricky, Robert, Raul and two sisters Paula Acosta and Rebecca Gonzales.

Raymond has lived in Brownfield since 1948 and went to school at Brownfield until he drafted into the United States Army on April 13, 1966, and served until April 12, 1969, in the Vietnam War. Raymond then met Maria Elena Cantu and they were married for 50 years. Soon their son Mark and their daughter Jona joined the rest of their siblings, Pete, Cynthia, and Teresa. Raymond worked for Gibsons before he joined Amoco where he retired after 29 years.

Raymond is preceded in death by his parents Gonzalo and Emma and his brothers, Joe and Robert.