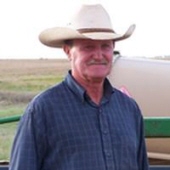 Reggie went home to be with the Lord on Friday, July 21, 2017, surrounded by friends and family. Reggie was born to Reg and Elouise “Bitsy” Martin on November 9, 1949. He graduated from Brownfield High School in 1968 and was a Texas Tech graduate. Reggie lived and farmed in the Tokio area all his life. He and his brother, Lee, farmed together for 38 years. Reggie loved his family first and foremost and was very proud of his nieces and nephews. Although a man of few words, when he spoke people listened and he was affectionately called “Boss” by his family and friends. Reggie was also an avid golfer and a talented horseman. He was greatly loved by his family and will be dearly missed!

He was preceded in death by his parents, Reg and Elouise “Bitsy” Martin; his brother, Lee Martin; and nephew, Jody Hart. Reggie is survived by two sisters, Ethel Hart, and husband Sonny, of Aspermont, Ann Heathcoat of Brownfield; a sister-in-law, Paula Martin of Brownfield; and numerous nieces and nephews.

Online condolences may be made at brownfieldfuneralhome.com.