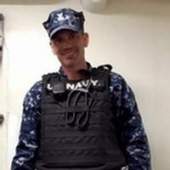 Richard Williford, 43, beloved Father, Husband, Brother, Nephew, Uncle, Cousin, & friend to many, took his last ride on the motorcycle that he loved, doing exactly what he loved to do & was called to his eternal resting place on June 12, 2017. He entered this world on December 16, 1973 in Ardmore, OK, born to Everette "Ed" Williford & Marcellette "Marcie" Williford.

Left to cherish his memory are:

Preceding him in death are his:

Richard proudly served active duty in the US Navy since 2002.

A memorial service will be held at 2:00 PM on Thursday, June 29, 2017 at the Brownfield Funeral Home Chapel in Brownfield, TX.