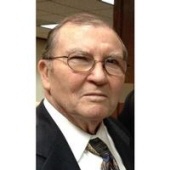 Graveside services for Robert Eber Rutledge, Jr will be held at 10am Friday, July 7, 2017 at Terry County Memorial Cemetery with Brad Huckabee officiating.

There will be a family visitation Thursday, July 6, 2017 from 5pm to 7pm at Brownfield Funeral Home.

Robert Eber Rutledge, Jr. was born June 25, 1935 in Benjamin, Texas and passed away July 3, 2017 in Richardson, Texas. He retired from International Minerals and Chemicals Corporation in 1990 after working for the company 28 years. He was a devoted follower of Christ, faithfully serving as a Bible teacher and deacon for many years.

Bob was preceded in death by his parents, Thelma and Eber Rutledge, his brothers, Pete Rutledge and Buzz Rutledge, his sisters, Latrice Harper and Jane Draper, and his son, Benny Rutledge.

In lieu of flowers, the family requests donations to the Salvation Army or a charity of your choosing.