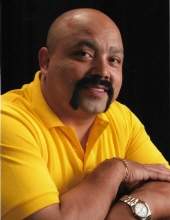 Funeral services for Robert Garcia will be held at 10 am Thursday, September 12, 2019, at Calvary Baptist Church with Eric Martinez officiating.

There will be a visitation from 6 pm to 8 pm on Wednesday, September 11, 2019, at the Brownfield Funeral Home.

Robert went to be with the Lord on September 7, 2019. He was born October 3, 1973, in Brownfield to Jesus Garcia and Juanita Alaniz Garcia. He graduated from Brownfield High School in 1993. Robert married Liana Bustillos on June 20, 2009, in Lubbock. He was a member of Faith Family Fellowship and was recently baptized. Robert was an entertainer and a prankster. He was the loudest at the game. It didn’t matter whose game it was he was always the biggest supporter. Robert was an amazing person, great dad and husband. He was the best brother and uncle. His kids meant the world to him. Robert is preceded in death by his mother, Juanita Garcia; niece Victoria Arriaga; and father-in-law Henrique Bustillos.