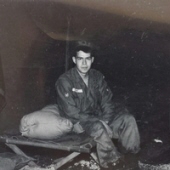 Robert Joseph Milligan, 79, of Brownfield, TX passed away on Monday, December 11, 2017 in Lubbock. He was born April 25, 1938 to Kenneth and Genevive Milligan in Cleveland, Ohio. He served in the United States Army. Robert moved to Brownfield in 1968. He was a loving father. He is preceded in death by his parents; sister, Colleen Neff; brothers Donald and Kenneth Milligan.
Robert is survived by Daughters, Sara Rodriguez and husband Roy, Jenifer Milligan, Gloria Benavidez; sons, Pete Benavidez and wife Kim, Fernando Benavidez and wife Karen; 16 grandchildren; 10 great-grandchildren; brother, Kermit Milligan; and sisters, Beverly and Dolly.