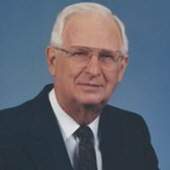 Bob was born in Tahoka, March 3, 1930 to Robert Lee and Ann Romayne (Cooper) Noble. He moved to Brownfield when he was in the fourth grade. After graduating high school in 1947, Bob attended college in Portales, NM and at Texas Tech. He served in the Army from October 1951 to October 1953. After basic training at Ft. Ord, California, he was assigned to the 347th Replacement Battalion at Zweibrücken, Germany. When he returned to Brownfield, he resumed his studies at Texas Tech,graduating in 1956. He started working with his father at Robert L. Noble Insurance and Real Estate Agency in Brownfield.

It was while at Texas Tech that he met Madolyn Irene Crow. They married June 7, 1957 at Brownfield First Baptist Church. Bob loved to fly and soloed on his sixteenth birthday. He owned two airplanes during his lifetime, the last being a 1967 Piper Comanche. He was a member of the Brownfield Pilot's Association and a member of the Southwest Comanche Tribe where he served a term as Tribe Chief. He also was a member of the International Comanche Society where he was treasurer and served a term as president. He and his wife made many flying vacations to Mexico, Canada and at least 28 states, including Alaska. He also made many trips fishing to Canada and Mexico. Bob sold his business in 1993 and retired and started enjoying his hobbies: woodworking, making furniture and knives. He spent many hours in his shop perfecting his knives.

Bob was an active member of the Brownfield First Baptist Church, serving as Sunday school teacher, Sunday school director, and church treasurer. He was also a member of the Jaycees, Brownfield Boys Club, the Optimist Club, and The Gideon International. He served on the Brownfield School Board from 1963 to 1979. He was a man few words, yet devoted to community service. Bob loved his children, cherished his granddaughters, and was amazed at his great grandchildren.

After 59 years of marriage, he leaves behind his wife, Madolyn; son, Robert Lee III and his wife Candace of Lucas; daughter, Camille Noble of Austin; granddaughters, Melissa Phillips and her husband Francis of College Station; Christian Drake and her husband Chad of Lewisville; and Danielle Noble of Allen; great grandchildren, William, Robert, and Hannah Phillips and Issac and Alexandra Drake; sister, Chara Beniah of Gun Barrel City; brother, Bill and his wife Marilynn of Lubbock; and several nieces and nephews.

A heartfelt thank you from the family to Interim Hospice of Brownfield for their compassion and care. Memorials may be made to Brownfield First Baptist Church building fund.