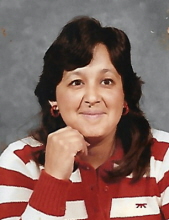 There will be a family visitation at Brownfield Funeral Home on Friday, November 8, 2019, from 6 pm to 8 pm.

Rosa passed away Wednesday, November 6, 2019, in Lubbock. She was born June 11, 1950, in Helena to Jesus Franco and Amelia Longoria Franco. Rosa had a big heart and was a loving and caring person. She was always there for her family. She is preceded in death by her father, three brothers, Rosendo Franco, Raul Franco, Robert Franco and granddaughter Hillary Flores.