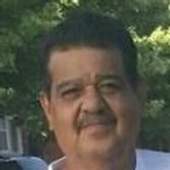 Rosendo was born in Brownfield, Texas on June 9th, 1952 to Jesus and Amelia Franco. He married his beloved wife, Mary Garcia, in Brownfield on September 17th, 1969. Together, they raised 6 children who blessed them with 10 grandchildren and 2 great-grandchildren. Rosendo loved nothing more than to spend time with his family, especially his grandchildren. He loved the outdoors and was a skillful craftsman.

He is preceded in death by his father, Jesus Franco, his brothers, Raul and Robert Franco.