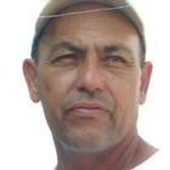 Services for Roy L. Rodriguez, 55, of Brownfield will be at 10am, Tuesday, September 9, 2014, at St. Anthony’s Catholic Church with Father Gerald Leatham officiating. Burial will be in Terry County Memorial Cemetery under the direction of Brownfield Funeral Home.

Viewing will be from 12pm-8pm on Sunday and 9am-8pm on Monday at Brownfield Funeral Home.

Roy passed away on Thursday, September 4, 2014 in Brownfield. He was born April 23, 1959 in Brownfield, to Roy Chandler and Tomasa Longoria. He attended school in Brownfield and was an automotive technician. Roy loved playing the guitar and racing his cars. He enjoyed being around his family and watching his grandkids play sports. They were his pride and joy. Roy was always willing to help anybody. It didn’t matter what time, if they called, he was there.

Roy married Eula Ellison in Brownfield on September 10, 1990. He is preceded in death by his father, Roy Chandler and grandmother, Manuela Reyes.