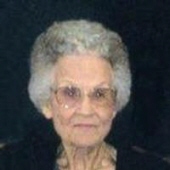 Ruby Sue Kelly passed away March 25, 2014. She was born April 4, 1914 in Happy, TX to H.N. (Wes) and Ruth Rodgers Key. At a very early age her family moved to Gomez where she lived until 2008 when she and her husband relocated to Rockwall to be close to her daughter. She attended Gomez school where she graduated in 1931. She married Denver Andrew Kelly on November 28, 1931. She was a farmers wife who loved to garden, cook, can and freeze the bounties from their truck patch. Her flower gardens were so pretty people would come to a stop on the highway to get a better look. After almost 78 years of marriage, Denver preceded her in death in 2009.