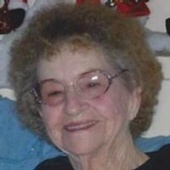 Funeral Services for Ruth Levetta Keith, 98, of Brownfield will be held at 2pm Monday, December 29, 2014 at Bethel Baptist Church with Rev. Tony Bishop officiating. Burial will follow at the Terry County Memorial Cemetery under the direction of Brownfield Funeral Home.

Visitation will be 9am to 11am Monday, December 29, 2014 at Brownfield Funeral Home.

Ruth was born on February 21, 1916 in Chillicothe, to John Andrew Glover and Ella Louise Day. She came to Terry County in the 1930’s in a covered wagon and Brownfield remained her home until she passed away on December 22, 2014.

Ruth loved the Lord and had the distinction of being the oldest Member of the Bethel Baptist Church. She was also an avid game player and loved playing Dominoes and Yahtzee with her sisters. Ruth worked for 15 years at the City Cleaners and for nearly 20 years at the Brownfield Regional Medical Center as a nurse’s aide.