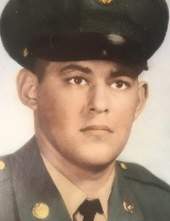 Salome Robledo Guerra passed away at Focus Nursing Home in Midland, TX on July 20, 2019. He was born in Edinburg, TX December 2, 1946. He served in th U.S. Army and was honorably discharged after serving in the Vietnam War.

He is preceded in death by his parents Antonio and Blasa Guerra, and brothers Antonio Guerra Jr. (Tony), and Felix Guerra. He is survived by his daughter Rachel Hill, and husband Frank, grandchildren Tiffany Hill, Gabriella Hill, and Victoria Hill of Nevada. Brothers Jesse Guerra, Alfredo Guerra and wife Josie, Lupe Guerra and wife Louisa, sister Irene Carter and husband Milton, sister-in-law Lupe Guerra and several nieces and nephews. There will be a memorial at a later date.