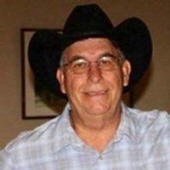 Upon graduation, Sammy attended South Plains Junior College where he met Linda Sue Flatt of Levelland and married on July 9, 1971. Sammy worked his way up what was the Agricultural Stabilization and Conservation Service (ASCS) office in Brownfield, Texas as a field man. Sammy became a County Executive Director in Knox County in 1983 before eventually settling down in Coleman, Texas in 1985. Sammy remained the County Executive Director of the ASCS office in Coleman, now called Farm Service Agency (FSA) until he retired in 2008 with 32 years of service.

Upon retirement, Sammy enjoyed golf as a member of the Coleman Country Club, working on his “ranch”, traveling with his family across the nation, but, most importantly, having a good time with his friends and family. It is these countless memories, stories, and laughs that Sammy cherished most.

Sammy requested that he be taken back to his boyhood home to be laid to rest. A memorial service for Sammy Ned Branch will be at 11:00 a.m. Wednesday, July 19, 2017, at the Meadow Cemetery in Meadow, Texas. Those wishing to join the family can meet at the First United Methodist Church of Meadow, 603 3rd Street, Meadow, Texas 76345. The procession will leave the church at 10:30 a.m.