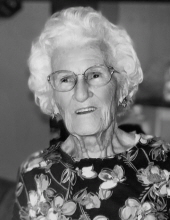 Graveside services for Sarah Elizabeth (Strain) Shepherd will be held at 10 AM, Monday, July 27, 2020, at Terry County Memorial Cemetery with Rev. Chris Seaton officiating. There will be a family visitation from 5 PM to 7 PM, Sunday, July 26, 2020, at Brownfield Funeral Home.

Sarah Shepherd went to be with her Lord on Wednesday, July 22, 2020, in Grove, OK. She was born on February 6, 1920, at the home of her Aunt, Nan Walker, in rural Collin County, Texas. The youngest child of John Henry Strain and his second wife Imogene Rossetter, she had seven half-siblings and an older brother, J. R. “Jake” Strain.

Standing on the front porch of the parsonage with the pastor of the Baptist Church in Floydada, Texas, she married James A. Shepherd, Sr. on February 28, 1940. At the time of her husband’s death, they had been happily married for 63 years. They raised three children, James A. Shepherd, Jr., Billy Joe Shepherd, and Kay Shepherd.

During WWII, her husband James was in the Navy and her brother, Jake, served in the Marine Corps. For the duration of the war, she and her mother proudly joined the workforce. Both were Rosie the Riveters at the North American Aviation Plant in Dallas, Texas. Sarah worked with B-25 Mitchell Bombers and her mother with P-51 Mustang Fighters. She was preceded in death by her parents, husband James in 2003, and son Billy Joe in 2012.

She is survived by her son James A. Shepherd, Jr. and wife Cathy of Honolulu, Hawaii, and her daughter Kay Fleming and husband Rick of Grove, Oklahoma. She is also survived by 3 grandchildren and 3 great-grandchildren.