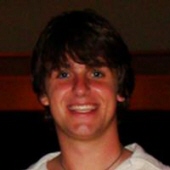 Sawyer Burleson Flache was born on August 12, 1987 in Lubbock TX to Harriet and Arthur Flache of Brownfield, TX. He was christened at Meadow Methodist Church in Meadow TX. He grew up in Brownfield and was active in Cub Scouts, Little League, Little Dribblers, and Children's Theater Workshop. He attended Brownfield Schools, participated in Football and Basketball, and Graduated from Brownfield High School with the class of 2006.

Sawyer attended Texas State University in San Marcos where he met his future wife. They have two precious daughters together, the first born in 2008, and the second in 2010. They spent many happy years establishing their lives in Central Texas. Sawyer graduated from Texas State University in the spring of 2013 with a Bachelor of Science Degree from the College of Science and Engineering. He interned at Lehigh Cement, and then accepted a position at TxDOT in Austin where he was employed at the time of his death.

Sawyer was a caring, artistic, and fun-loving person who lived his life surrounded by loving family and friends. Every encounter with Sawyer included a big hug, a cheerful smile, and an enduring impression of his sincere kindness. He took genuine interest in those around him and took the time to make others feel valued and loved. Generous and thoughtful, he would give the shirt off his back to a stranger in need without hesitation.

He enjoyed being outdoors and was most at home, on the rivers and lakes of Texas.

He loved his family deeply and spent his time making lasting memories with his daughters. He encouraged their free spirited nature and showed them how to embrace life with enthusiasm. Whether helping them hunt for crawfish, swim at the springs, or learn to fish, he was right by their side to show them the way. He was a great dad.

He is survived by many who love him. His Daughters, their Mother and her Family, his Parents, Maternal Grandfather, Great Aunt, Paternal Aunt, and First Cousins as well as his extended family and loyal and
loving friends. His gentle nature was felt by all of us. His life was a gift. Here for too short a time, he will be greatly missed.