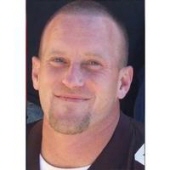 Services for Shawn Dee Mann, 37, of Brownfield will be held at 2pm Monday, November 14, 2016 at Brownfield Funeral Home Chapel.

Visitation will be held on Sunday, November 13, 2016 from 6-8pm at Brownfield Funeral Home.

Shawn was born on May 23, 1979 to Troy Mann and Rosa Brown in Brownfield, TX. He was a loving son, brother, daddy of two little girls, uncle, grandson, nephew and cousin. He was lost too soon from this earth. Shawn always protected his family no matter the cost. His two little angels, LeeAnna and Addison were the light of his life. Even though he left his worldly home unexpectedly, we know he is watching his family in his heavenly home with our Lord Jesus. He was loved by his family and many friends that were always with him. Shawn was preceded in death by his grandpa, Bobby Mann and an uncle, Terry Elmore.