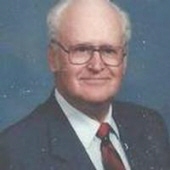 Services for Stanley Nolan Miller, 91, of Brownfield will be at 10am, Friday, April 18, 2014 at Calvary Baptist Church with Rev. Charles Wyatt and Rev. Roger Foote officiating. Burial will be in Terry County Memorial Cemetery under the direction of Brownfield Funeral Home.
There will be a family visitation at the funeral home on Thursday evening from 6-8pm.
Stanley passed away Tuesday, April 15, 2014 in Brownfield. He was born on November 13, 1922 to Ira Herbert and Mary Louise (Ivey) Miller in Denison, Texas. He and his family moved to Brownfield in 1936. He graduated from Brownfield High School in 1942. He then attended Wayland Baptist University. He was a WWII Air Force Veteran. He was a member of the American Legion and Kiwanis. Stanley married Zelma Foote on September 1, 1951 in Brownfield. He was the Tax Assessor-Collector from 1960 until retiring in 1985. He was a member of Brownfield First Baptist Church where he was a deacon and Sunday school teacher for many years. He is preceded in death by his parents, 2 sisters and 6 brothers.
Stanley is survived by his wife Zelma of Brownfield; 2 daughters, Dian Dawson and husband Marvin of Levelland and Vickie Coker and husband Bill of Brownfield; 6 grandchildren, Michael Dawson and wife Pebble of Lubbock, Jeromy Dawson and wife Amy of Levelland, Christopher McMillan and wife Amber of Mesquite, Casey Coker of Brownfield, Nicholas Coker of Brownfield and Chris Coker of Dallas; 5 great grandchildren.