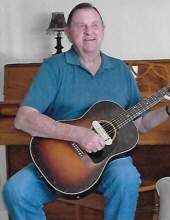 Services for Stanley Rimer, 87, of Lubbock will be held at 10 am Thursday, August 6, 2020, at Terry County Memorial Cemetery with Jody O’Bryant officiating.

Stanley was born on October 21, 1932, to Charles “Owen” and Mabel Rimer in Rush Springs, OK. He enjoyed family, fishing, and woodworking. Stanley married Ardeth on January 12, 1983, in Brownfield. In his early years, he worked as an oilfield pumper and later he pursued a career in truck driving.