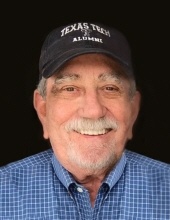 Stephen Edgar Ellis passed away on April 30, 2020 in Lubbock. He was born on June 12, 1944 in Tahoka, TX to Burns and Helen Ellis. He graduated from Tahoka High School and later Texas Tech University. Steve married Glenda Kuehler on March 5, 1966 in Lubbock. He spent his early years working for the USDA and lived in Perryton, Morton, Haskell, Denver City and finally moved to Brownfield, TX in 1978. He bought a farm and started farming part time, until he retired from USDA in 1986 and began farming full time until his retirement in 2013. Steve’s hobbies included competitive trapshooting. He traveled the United States enjoying these competitions where he won numerous awards and titles. His other hobby was doting on his grandchildren at every opportunity. He seldom missed any activity that they participated in. Steve is preceded in death by his wife Glenda Ellis and his parents Burns and Helen Ellis.