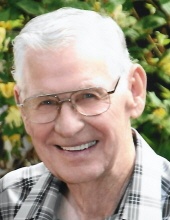 Alfred Steve Lawlis was born January 27, 1937, in Merkel, Texas to Edward and Jimmie (Cox) Lawlis. Steve stepped into Glory on May 14, 2020, in Brownfield. Steve married the love of his life, Barbara Lee Gruben on February 9, 1958, in Union, Texas, and recently celebrated their 62nd anniversary. Steve attended barber college and was co-owner of Broadway Barbershop in Brownfield until taking a position with Amoco Production Company in 1972. Steve retired from Amoco as a field foreman in 1994. He was an active member of the First United Methodist Church, serving on many boards, and was active in the Backyard Mission Group. Steve also served on the board of the XYZ Club, was a community reader at the elementary schools, and served as president of the Meals on Wheels, delivering food to the homebound for many years.

Steve was a gentle and loving soul who never met a stranger, and was a living example of Christ’s love for others by helping anyone in need, whether it be mowing yards, repairing plumbing, or moving furniture. He continued to serve his fellow man until his health began to fail. Steve loved God, his wife, and his family unconditionally. In his retirement, Steve loved nothing more than spending time with his family and cheering on his great-grandchildren at their sporting events.

Preceding Steve in death and welcoming him into his Heavenly Home were his parents, Edward and Jimmie Lawlis, a daughter, Stephnie “Lanie” Bryant, and brothers, Kenneth Lawlis, Lynn Lawlis and Jim “Buddy” Lawlis.

In lieu of flowers, the family suggests donations to the Alzheimer’s foundation or the church of your choice.