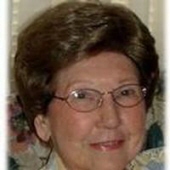 Thelma was born September 29, 1921 in Blackburn, OK to Fred and Edith Cotham Parkes. She moved to Pampa, TX with her family in 1930 where she attended school and was graduated from Pampa High School in 1939.
Thelmas father Fred died when she was only three years old. Her mother remarried a kind man, Ken Brannon, who lovingly raised Thelma and her two sisters. Ken was the only Dad she knew.
On January 6, 1940 Thelma married the love of her life, Robert Leo "Bob" Bailey in Pampa and they celebrated their 72nd anniversary shortly before his death in 2012. The family lived in Pampa, Knox city and Rule before moving to Brownfield in 1963.
Thelma served with Bob as leaders of the youth group at Central Baptist Church in Pampa. She was also active in churches in Knox city, Rule and Brownfield in various areas of service.
A skilled seamstress, Thelma made most of the clothes for herself and three daughters for many years. She sold Avon for 25 years and was much loved by her customers.
She loved working crossword puzzles and playing word games with her family. For many years her favorite pastime was playing bridge and she was in several bridge clubs during that time. Thelma and Bob were great supporters of their grandchildrens sporting events and spent many happy hours and miles traveling to see them. For many years, they spent their summers at Tall Pines Campground in Ruidoso, NM, where they cultivated many lasting friendships.
Thelma is survived by three daughters, Pam Schonerstedt and husband, Glen, of Levelland, Judy Fenton and husband, John, of Snyder, and Kathy Tyler and husband, Bruce, of Brownfield. She was "BeBe" to eleven grandchildren: Kami Wade, Kristi Martin, Kraig Schonerstedt, Rob Bailey, Brad Bailey, Brian Bailey, Kenda Jowers, Korbin Reeves, Keri Williams, Keitha Bowman, 23 great-grandchildren and three great-great-grandchildren, a sister, Pat Baker, and wonderful caregivers, Joann Gomez, Patsy Flores, Priscilla Castillo and Janice Timmons.
She was preceded in death by her parents, her beloved husband, Bob, son, Mike Bailey, grandson, Rus Bailey and a sister, Sid Sloan.
Donations to Hospice of Lubbock would be appreciated.