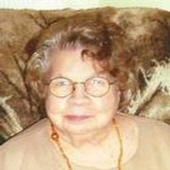 Visitation will be held from 5-7pm on Friday, November 7, 2014 at Brownfield Funeral Home.

Thelma passed away on Tuesday, November 4, 2014. She was born on February 21, 1935 to Connor and Ella Wendell in Fayetteville, West Virginia. Thelma married Junior Ellis Fleming on April 8, 1951 in London, West Virginia. He preceded her in death on August 20, 1994. She is also preceded in death by her parents, Connor and Ella Wendell; a grandson, Stephen Fleming and a brother, Roy Wendell.