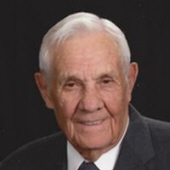 Thomas Lafayette Adams (August 14, 1929 - October 31, 2015) Memorial services for Tom Adams, 86, of Brownfield will be at 2:00 pm, Tuesday, November 3, 2015 at Brownfield First Baptist Church with Rev. Randy Land and Rev. Matt Baird officiating. Family visitation will be Monday, November 2, from 5-7 pm at Brownfield Funeral Home and online condolences may be made at www.brownfieldfuneralhome.com.

Tom passed away on October 31, 2015 in Brownfield. Thomas Lafayette Adams was born August 14, 1929 to W.M. Adams and Ethel Treadaway Adams. His father was a settler of Terry County who homesteaded land in 1902.Tom called Brownfield home for his 86 years. He began farming in 1952 and loved the land and Terry County. Tom was well known for his sports accomplishments. He was an All-State football player at Brownfield High School and played at Texas Tech University and Hardin Simmons University on scholarships. He graduated from Hardin Simmons in 1951 and in 1987. He was inducted into the Hardin Simmons Athletic Hall of Fame for his football and boxing accomplishments. In the late forties and early fifties, Tom won five Texas state boxing championships, three as a light-heavyweight and two as a heavyweight. He won five Golden Gloves championships and is the only man to win them in consecutive years. In 1948, he was the Light-Heavyweight Champion of the 13th Olympic District and in 1949; he was named a member of the International Boxing Team. While stationed at Ft. Sill, Tom won the Oklahoma State Golden Gloves Heavyweight Championship. Toms last boxing title came in 1955, when he was the 8th Armys Heavyweight Champion and the Armed Forces All-far East Champion while he was stationed in Korea. One of the honors of which he was most proud was the Christian Athletic Award given to him by the West Texas Boys Ranch.

Tom was a lifelong member of the First Baptist Church of Brownfield where he taught Sunday school to youth and adults for over 50 years. Tom was kind, honest, and generous and strived to live by Christian values. Tom was passionate about helping children and youth. He organized and coached youth boxing for many years. He taught and coached football for several years in the Brownfield School system. He also coached little league baseball. Most of all, Tom loved his wife, Marilyn, and his family. Tom is preceded in death by four siblings, Kyle Adams, Irene Paddack and Mildred Adams, all of Brownfield and Mary Nell Royer of Dallas, and by his grandson, Blake Adams of Lubbock. In 1952, Tom married Marilyn Petty of Abilene, Texas, who remained the love of his life for over 63 years. He is survived by Marilyn and his three children, Angela Adams and husband, Stan, Matt Adams and wife, Monica and Mark Adams and wife, Jennifer; his grandchildren, Marisa and Kadyn Wilson, Abbie and Luke Adams, Victoria Ericson, Tyler and Logan Adams; and great-grandchildren, Kennedi, Brock and Zack Ericson. Memorials may be made to Brownfield First Baptist Church, 219 W. Main, Brownfield, TX 79316 or to Alzheimers disease Research, 22512 Gateway Center Drive, Clarksburg, MD, 20871.