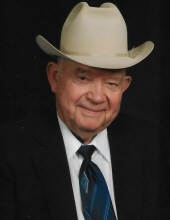 Memorial services for Thomas Lee Miller will be held at 10 am Tuesday, July 13, 2021, at Immanuel Baptist Church with Pastor Bruce Cargile officiating.

Lee went to be with the Lord on Friday, July 9, 2021. He was born December 3, 1923, to Thomas Isreal Miller and Hettie Burrows Miller in Brownfield, Texas. Lee graduated from Union High School and served in the United States Navy during World War II.

Lee is survived by his bride of 71 years, Martha; two sons, Gordon Miller and wife Sharon; Gary Miller and wife Debbi; and a daughter Kathy and husband Cecil, all from Brownfield. Lee had four grandchildren: Angie, Tracy, Doug, and Te'Auna; and four great-grandchildren: Ethan, Zoey, Maverick, and A'Lexxus.

The family would especially like to thank Texas Home Health Hospice and The Cottage staff for making his final days peaceful.

In lieu of flowers, the family request donations be sent to the Brownfield Senior Citizens Center, Box 1021, Brownfield, Texas 79316.