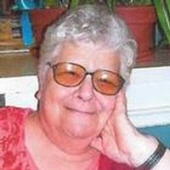 Vernelle was born on June 19, 1936 to Leila Flache Ford of Brownfield, TX and Jay B. Ford of Portland, OR and passed into our heavenly Father’s arms on August 13, 2014. Vernie was a gift of happiness and uplifting joy to be around, a special person who knew she would be in heaven. Her needs were special, and her gift was happiness. She was a complete joy, full of energy and often mischief, always happy about everything, and her laughter was infectious. She was a child of God and we loved her so much.Vernelle’s home for the past 7 years was the Autumn Winds Retirement Center, just outside of San Antonio, in Schertz, TX. All the Staff and friends of Autumn Winds loved her and will miss her dearly. Vernie was preceded in death by her parents,a sister, Sandra Sue Ford, brother, Jimmie Brodie Ford, and her beloved cousin Patsy Hopper, of Pueblo, CO.