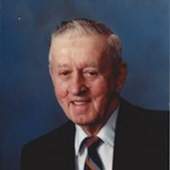 Funeral services for Vincent Schertz, 92, will be held at 10 am Thursday, August 4, 2016 at St. Anthony’s Catholic Church with Father Gerald Leatham officiating.

A rosary will be held at 7pm Wednesday, August 3, 2016 at Brownfield Funeral Home Memorial Chapel.

Vincent passed away August 1, 2016, following a short illness. He was born in Rowena, TX on January 19, 1924. He married Leona Henneke on November 9, 1948 following his years of service in the US Army of the 33rd Infantry Division. His service included 6 tours of duty. Vincent and Leona settled in Brownfield in 1958. He went on to become Brownfield Fire Chief. He was a member of the Brownfield Police Reserves, the American Legion, and a Commander of the VFW. He was a devoted Catholic and a member of St. Anthony's Catholic Church. He served as Eucharistic Minister and was a life long Knights of Columbus. Vince is best known as a Tractor Mechanic. He recently retired and closed Vince Schertz Tractor Repair at the age of 92. He loved his job.

In lieu of flowers, donations may be made to St. Anthony's Catholic Church Building Fund.