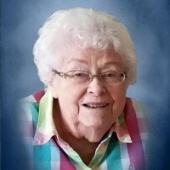 Violetta Rains home-going was July 1, 2018. She lived a very full 93 years and will be greatly missed by her family and friends. A private graveside service will be held in Plains, TX. Visitation will be held from 5 to 7 pm on Tuesday, July 3, 2018, at Brownfield Funeral Home. A memorial service will be held at a later date with details to be announced. Online condolences may be left at brownfieldfuneralhome.com.
Violetta was born in Corsicana, TX on March 25, 1925, to Callie E. and Salena (Jarrard) Griffin. She graduated from ODonnell High School. She married Carl Rains on January 3, 1948 in Lamesa, and they moved to Tokio where they lived until Carls passing in 1989. In addition to farming alongside her husband, Violetta also worked various interesting jobs over the years. She was a telephone switchboard operator, a surveyor for the State, and an employee at the Tokio Gin and Post Office. She was also a member of the Terry County Museum Board. "Granny" was well known for her baking skills, especially apple pies and chocolate cakes. Her family fondly remembers her love of "her shows" - her number one favorite being "The Price is Right." She was also a big fan of the Dallas Cowboys, Nascar and George Clooney. She was a member of Tokio First Baptist Church and she taught Sunday School there for many years.
Violetta was preceded in death by her parents; her husband, Carl; a son, Alton C. Rains; a sister, Mildred Crecelius and a brother, Bobby Dan Griffin. She is survived by her son, Ronnie Rains and wife, Francy of Brownfield; 3 grandsons, Scotty Rains and wife, Chesle of Plains, Steven Bunch and wife, Candace of Plains, and Beau Rains and wife, Lachrisa of Tokio; 2 granddaughters, Sherry Nock of Midland and Carly Goheen and husband, Jeremy of Lubbock; a brother, Billy Gene Griffin; a sister, JoAnn Griffin Jackson and sister-in-law, Lois Sherrill; several nieces and nephews, numerous great-grandchildren and a great-great-grandchild.

In lieu of flowers, please make donations to your favorite charity.