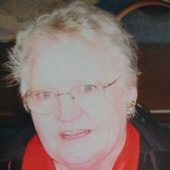 Funeral services for Virgie Lou Jenkins will be held at 2 pm Friday, December 28, 2018, at Calvary Baptist Church with Rev. Randy Elftman officiating. Burial will follow at the Terry County Memorial Cemetery under the direction of Brownfield Funeral Home.
There will be a family visitation on Thursday, December 27, 2018, from 6 pm to 8 pm at Brownfield Funeral Home.
Virgie passed away Saturday, December 22, 2018, in Brownfield. She was born to Charles and Bettie Ammons on December 8, 1934, in Post. Virgie graduated from Post High School in 1953 where she played basketball and volleyball. Virgie married Thomas Raymond Jenkins on August 26, 1953, in Post. They lived in Post, Big Spring, Big Lake, Snyder, and then finally settled in Brownfield on July 19, 1964, where she lived in the same house up until her passing. Virgie was a lifelong member of the Nazarene Church in Post, Brownfield, and Ropesville. She was a mom, wife, and homemaker. Virgie started work as a micing machine operator at Cotton Classing Office in the fall of 1969. She then went to work at the Fabric store in 1974 where she became the manager from 1976 to 1980. She then went to work for the City of Brownfield from 1981 to 2009.
Virgie is preceded in death by her husband, Thomas Raymond Jenkins, son, Tony Ray Jenkins, 4 sisters, and 3 brothers.
Virgie is survived by her 4 sons, Troy Jenkins and wife, Dianne, of Woodrow, Tommy Jenkins and wife, Dodie, of Post, Tim Jenkins and wife, Mitzi, of Brownfield, Ted Jenkins and wife, Gena, of Harrah, OK; 12 grandchildren; 22 great-grandchildren; and 4 siblings, Weaver McKamie of Post, Pokey Ammons of Lubbock, Bugs Ammons of Front Royal, VA, and Corky Ammons of Post.