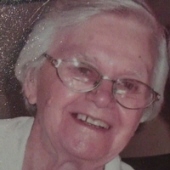 Virginia Sue Doss passed away in Pampa, TX, on Friday, November 30.
There will be a memorial service for her on Tuesday, December 4, at 11:00 in the Brownfield Funeral Home Memorial Chapel in Brownfield. Pastor Ruby Moultrie will be officiating.
Sue had been a long-time resident of Brownfield and of Terry County. She was born on May 3, 1928, in Haskell County, Texas, to Elmer C. Watson and Birdie Eufalia (McElreath) Watson. She was the youngest of four children and the only girl. She grew up with her brothers, Elmer, Joe Mc, and Gene, in Dimmit, Castro County, Texas. After graduating from high school, she moved to Brownfield. There, she met Carroll P. Doss, and they married in the Brownfield First United Methodist Church on Christmas Eve, 1948. She and C.P. later had and raised 4 daughters. Sue was a Christian and a life-long member of the United Methodist Church.
Sue was a homemaker, and was devoted to her family. After her daughters left home, she opened and ran a day-care center in Brownfield. Sue was most skillful with the sewing machine and the needle. For her daughters, she made all of their dresses, Girl Scout uniforms, formal dresses, winter coats, and their wedding and bridesmaid dresses. She also made drapes and curtains. She even reupholstered, wingback chairs, sofas and even the seats of the family sedan. Her embroidery and knitting efforts are examples of fine exquisite work. Every one of her children and her grandchildren and most great-grandchildren have at least one colorful quilt which Sue made. It was a great sorrow for her when her eyes no longer enabled her to sew. Also, Sue was a farmers wife, and canned or froze many, many quarts of vegetables. Though not quite adept at woodworking as her brothers, she made serviceable wooden shelves and cabinets.
Sue was an adult leader of Girl Scout troops for more than 30 years, receiving a special recognition from the Lubbock Girl Scout district. She loved camping, with the scouts or with her family. And she was an expert cook with a cast iron pot, over an open fire or buried in a fire pit.
With three older brothers, she could not help but play basketball and baseball. And with brother Genes encouragement, she became an avid and excellent bowler.
Preceding her in death were her husband, her parents, her brothers and their wives, a daughter, Kerry Doss, a son-in-law David Dawson, and a great-grandson Thomas Shanks. Sue is survived by daughters, Sharron Hurst and husband Ron of Pampa, Karen Steffens and husband Bob of Spring, and Carol Dawson of Texarkana; by 7 grandchildren, Eric Steffens, Dirk Steffens, Shaun Hurst, Samantha Hurst, Nicholas Dawson, Stephanie Little, and Cheyenne Doss; and by 10 great-grandchildren.
The family also is extremely grateful for the ministry and care given to Sue by her family at the Brownfield United Methodist Church, the staff at the Pampa Nursing Center, and her friends, Phyliss Harbison, Santos Mata and Pastor Ruby Moultrie.
Sues family also suggested memorials to Brownfield First United Methodist Church (Retired Pastors Pension Fund) and to the Girl Scouts of the Texas/Oklahoma Plains at www.gs-top.org/en/donate/ways-to-give.html