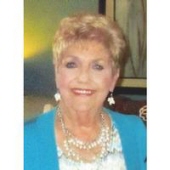 There will be a family visitation 6pm to 8pm Wednesday, July 5, 2017 at Brownfield Funeral Home.

Waneta passed away Monday, July 3, 2017 in Brownfield. She was born December 29, 1934 in Hinton, OK to Elmer Truman Brown and Jessie Mae Smith Brown. She attended school in Hinton, OK. She married Donald Robertson on August 3, 2012 in Brownfield. Waneta attended First Christian Church. She was a very loving wife and mother, and a fantastic Nena to her grandchildren and great grandchildren. Waneta is preceded in death by her husband of 55 years, Douglas Lee Ryburn, son, Eddie Don Ryburn, parents, Elmer and Jessie Mae Smtih Brown, step dad, Robert Petticrew, three sisters, and two brothers.