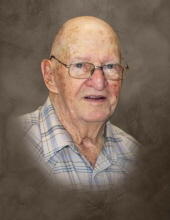 William ‘Bailey’ Yarbrough ‘91’ passed from this life to his eternal home early Tuesday morning on May 5, 2020. A Celebration of Life will follow at 2:00 pm Friday, May 8, 2020 at the Brownfield First United Methodist Church. Yarbrough was born November 27, 1928 in Oplin TX to Louie and Blanche (Collins) Yarbrough. He was born extremely premature and not expected to live the night. He lived a full fun filled 91 years. His family moved between Oplin and Kerns, TX. At a young age, he and his older brother were residents of the Waco Children’s Home. Later, a family relocated him Arizona. While in Arizona he worked several times at the Grand Canyon. He had many tales-to-tell about his excursions.  He enlisted in the US Army Air Corp at the age of 17 in September 1946 in Flagstaff, AZ. and served overseas in Japan 30 months. He was discharged from the US Air Force in September 1949. He returned to work at the Grand Canyon and eventually relocated to Baird, TX. He met Mary Ellen Burrow in March 1950 in Clyde, TX and married his wife of 67 years on June 21, 1952 on her 18th birthday.  The couple moved from Baird, TX to Denver City, TX in 1954, where he began his 31-year career with Amoco Oil Co. retiring in 1986. He is preceded in death by his parents and a brothers, Thomas and Elvie and sister Lois. Survivors include his wife, Mary Ellen Yarbrough, daughter, Rita Murry and husband, Max of Brownfield, son, William Randal ‘Randy’ Yarbrough of Lubbock. Grandchildren, Nathaniel ‘Nate’ Yarbrough of Brownfield and Morgan Bailee Murry of Lubbock. Haylee Potter (Chance), Levelland, Gabriel Murry (Jeanne), Las Cruces, NM, Great-grandchildren, Nathaniel and Ariel Yarbrough both of Lubbock, Rayden, Casen Ashtyn Potter, Dylan and Sephra Murry.In lieu of flowers send memorials to Brownfield Senior Citizens for senior meals and/or Brownfield First Methodist Youth Fund.