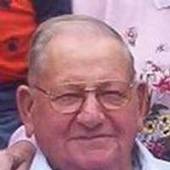 Services for William Beal Gruben, 91, formerly of Brownfield, will be held at 2pm on Thursday, March 6, 2014 at Bethel Baptist Church with Tony Bishop officiating. Burial will follow at Terry County Memorial Cemetery under the direction of Brownfield Funeral Home.

William passed away on March 3, 2014 in Lamesa. He was born on April 22, 1922 in Royston, TX to Epkie E and Minnie Etta (Parker) Gruben. William married Edrie Gruben on April 6, 1973; they were married for 40 years. Edrie preceded him in death on October 12, 2013. William is preceded in death by his parents, Epkie E and Minnie Etta Gruben; 3 brothers, Billy Gruben, W.C. Gruben and Jim Evans; 2 sisters, Ruth Crouch and Lois Bevells.