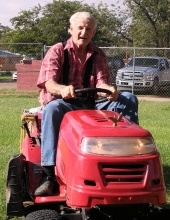 William "Bill" Benton passed away on June 15, 2021 in Brownfield. Graveside service will be held at 10 am on Monday, June 21, 2021 at Terry County Cemetery with Rev. Chris Seaton officiating. Viewing will be held from 1 pm to 8 pm Sunday, June 20, 2021 at Brownfield Funeral Home.

William "Bill" Bryan Benton born in Union, Texas to RR and Ethel Benton on November 25, 1934. He lived in Union and Brownfield until he moved to Compton, California. He was drafted into the Army at 20 years old. He married the love of his life Mary Conn Benton in 1957. He worked for years at companies that made parts for the space shuttles. They had 3 children and raised them in Norwalk, California until moving to Brownfield in 1982.

He was a mechanic and owned his own garage for several years. He loved people and telling stories. He also loved to make unique items including swords, knifes, walking sticks, pipes, matchlock guns, painted gourds and shovel birds. Bill retired to help watch the grandchildren so the babies didn't have to go to day care. He never met a stranger and loved everyone and they loved him.